Your Brain – A Work in Progress 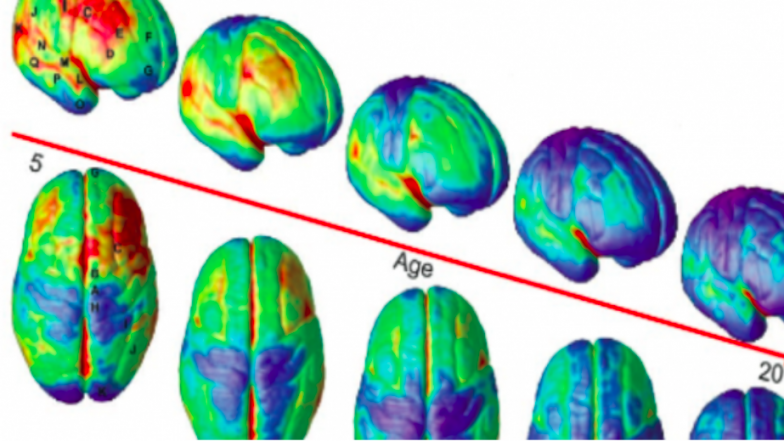 In the brain images shown above, all the areas that are NOT blue indicate the as-yet under-developed brain – all the way up to age 20. Our brains aren’t fully developed until around the mid-twenties  (Graphic is downloaded from PNAS 101: 8174-9, 2004)!

The parts of your brain that help you (1) to control your emotions, (2) make well-reasoned decisions, and even (3) to assess situations are simply NOT all there during your ‘formative’ years. Think about how many of your strongly held beliefs got based on very inadequate reasoning.

This video demonstrates just how limited (concrete) childhood reasoning is. Now, consider how negative feedback in your childhood might’ve gotten explained (by you) using some really concrete ALL or NONE reasoning (i.e., It’s all my fault; I’m a failure). Even when we got positive feedback as children, we tend to use the ‘negative bias’ we formed from earlier learning. These explanations tend to harden into our core beliefs … about ourselves, others, and the world.

You have to reach a certain age before you can see situations from anothers perspective. So, when you got criticized, it would be more likely that you’d think, “There’s something wrong with ME” rather than … “Mom’s having a bad day … which is why she yelled at me.” In this video, you’ll see this ‘self-centeredness’ demonstrated in minutes.

People can have anxiety – even panic attacks – when they feel disconnected or far away from loved ones. This kind of anxiety may originate from early life experiences when our brains literally cannot comprehend that people exist – even if they’re out of sight. That cognitive milestone is called ‘object permanence’ and is demonstrated here.

For a full (but simple) ‘crash course’ about the 4 stages of our brain development, watch this video.

In therapy, it’s useful to study beliefs you formed as a child … now with the benefit of your fully-developed brain. People are sometimes surprised to learn how much their early-learned beliefs impact daily work, love, and play. As well, you can train yourself to respond differently – to ‘manage’ these automatic beliefs. You will want to begin by starting a practice of mindfulness – to LEARN to pay attention to when your automatic brain starts to take over.

“Well-Being is a Skill”

Modern neuroscience teaches that we can train our brains to have more well-being. Watch a thought-leader in the field of neuropsychology, Dr. Davidson, talk in Part I … about the science of well-being and in Part II … the 4 constituents of well-being, including the importance of practicing mindfulness.