Lessons from Teaching at a Simulation Center 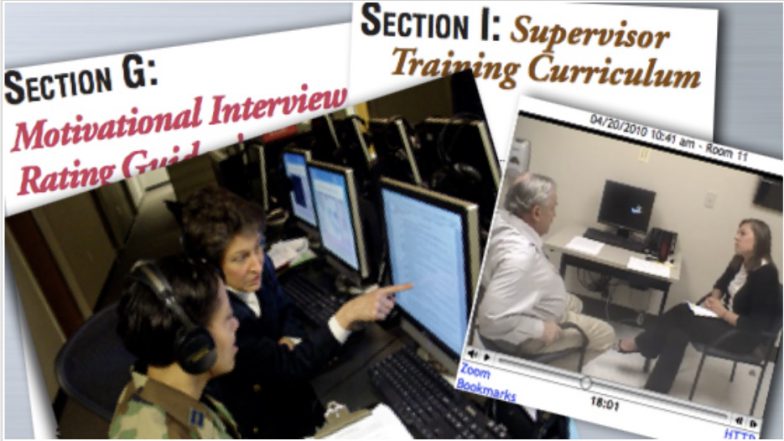 These courses used the best methods, materials, and measures to train in the most essential assessment, therapy, and supervision core competencies:

The National Training Director invited us to the flagship Army Psychology Internship (Tripler in Hawaii) to train his faculty and other internships across the country how to adapt our methods & measures to their training.

The Council of University Directors of Clinical Psychology (CUDCP) invited us to their 2011 annual meeting, to showcase our training model – having seen our poster at the 2010 Association of Behavioral & Cognitive Therapies (ABCT) conference.

It was great fun to work with talented actors. We wrote weekly stories for the 4 different ‘Simulated Patients’ they portrayed. We choreographed & coached the actors for each weekly encounter.  Each session was like an episode out of a soap opera – produced by a simulation center crew behind the scenes who provided ‘moulage’ (e.g., dumping whiskey all over actors who were portraying a substance use disorder episode).

The following week, each class (I and II) met to share feedback about those sessions as well as to plan for the next treatment session. At one point, we had a crew of 2 faculty members, 2 post docs, and 2 teaching assistants who were supervising up to 12 graduate students.

At times, it seemed like there was a cast of thousands. These courses could not have worked without the many years of dedicated teams of  Faculty, Fellows, & TA’s who made directing Clinical Skills richly rewarding. The 2010 crew is pictured below, beginning with Associate Professor Holloway.

Each session was captured, minute-to-minute, in online videos.  Supervisors and students would show clips of their videos at group supervision sessions – to help illustrate specific clinical dilemmas or questions.

At the end of each weekly encounter, each Simulated Patient gave constructive written feedback to their therapist (student), about what was helpful (or not) – using validated forms.

As well, supervisors and students used validated instruments to assess over 20 dimensions of clinical skill during each session. Supervisors rotated, so that each student had the benefit of feedback from several perspectives.

Characters portrayed people with medical illnesses (e.g., cardiac, chronic pain, diabetes), psychiatric disorders (e.g., PTSD, Depression, ADHD, Substance Use), and lifestyle issues (e.g., weight management, smoking cessation). As if that wasn’t enough, these people were finding themselves in many crises (e.g., relationship issues and divorce, cardiac rehab, demotion and employment clashes with supervisors, lack of family support) that would pose ethical and other dilemmas for therapists.

Initially, Howard came in feeling pretty well. He just had some chest pain. So his primary care doc referred him for help with stopping smoking and diet and exercise management. Well, before we knew it, he had the feared heart attack. When he returned to us he was in cardiac rehab and much more ‘ready to change’ his lifestyle habits. Still, he did have quite a bit of impatience and hostility, which would flare up rather often.

But, shortly after his heart attack, Howard began having huge anxiety attacks. Not just any old anxiety. That near death incident triggered a flood of all those horrific memories from an IED attack he barely survived, before retiring from the Army last year.

And, he was always torn about how close he wanted to get … now that his ex-wife came back into the picture. We’ll let you imagine … did he get back together with her … was he able to quit smoking … did his anxiety get better?

Over 14 sessions, a crew of Howard’s were trained & coached weekly in how to portray certain challenges related to Post Traumatic Stress Disorder, Type A hostility, diet & exercise behavior change, and interpersonal conflicts.

Denise was not only depressed, she was very angry with her doctor for dumping her on a psychologist. She had really bad physical pain. And, she believed that he just didn’t want to listen to her complaints anymore. She thought her doctor was clueless and there was no hope in sight.

Meanwhile, she was so fatigued, she had to cut back her work hours, she couldn’t make plans with people and so she was getting more isolated, she couldn’t sing in the choir anymore, she couldn’t even focus on reading. All she knew was she used to be (at least strive to be) the perfect wife and mom – maybe a little too much people pleasing. Now, they had to take care of her and she felt like a huge burden on her family. In her fifties, she felt like she was in her eighties.

In fact, she did have a lot of complaints … and wondered herself how one person could have so many things wrong with her. She had a real headache .. a real stomach ache … real pain in her joints, that seemed to move around her body  … and she seemed to get sicker and sicker.

Each time her doctor prescribed a new drug, it made her feel even worse. She couldn’t stay asleep and she couldn’t remember things that were obvious to her before. Her only guilty pleasure left was smoking … she wasn’t going to give that up!  Over 14 sessions, the crew of Denise’s were coached in how to portray a military wife with pain and sleep problems associated with fibromyalgia (Chronic Multisymptom Illness), depression, & low readiness to change (i.e., smoking).

This one was active duty in the Navy (building jets) and wasn’t coming for help – willingly. He didn’t think that his coming in late to work or fighting was such a big deal. But, his Commanding Officer threatened him. If he didn’t go to the ‘shrink’ to ‘get better’ he’d mandate that Seth seek treatment – a far more serious situation.

Even though he’d already been demoted once for getting into fights, Seth was still in denial – about a lot. It was never his fault – whatever the problem was.  He knew he wasn’t like his father, the violent alcoholic. He didn’t drink like his father and he didn’t beat up on his kids. It wasn’t his fault that he didn’t feel well in the morning to get to work on time.

In his mind, he deserved to drink to forget. After all, he was the victim here. He was the one who lost his wife and 2 kids in a car accident seven years ago. He just drank to numb out the loneliness and heartache. In his mind, anybody would. What else was left for him to do?

The crew of Seth’s got doused with bourbon a few times. And, they were coached in Substance Abuse, ADHD, complicated bereavement, suicide, readiness to change … and can you tell … anger issues!

Candace was struggling with the break-up of her marriage. Her husband was acting very differently from returning from war, actually several deployments. He finally did break it off – to fall in love with a woman with children. Candace couldn’t have children. Most of her therapy was dealing with a severe depression.

Also, her primary coping mechanism was to work long hours and not take adequate care of herself. That didn’t work out too well. Twice, she ended up hospitalized – last time in a diabetic coma. It’s complicated. Candace had diabetes from a very young age. Her mother literally hovered over her day and night, checking her blood sugar.

So, Candace unfortunately learned to become too dependent on her mother – and then her husband – for basic self-care. Consequently, as an adult, she struggles with ambivalence about self-care of her diet, exercise, and diabetes self-management skills – but has no idea why.

Candace’s were prepped in how to portray a Major Depression, dependency issues, and medically non-compliant behavior related to Diabetes self-care.

Although these courses used the best methods, materials, and resources, they were prohibitively expensive to maintain and ultimately they were discontinued for that reason!  First they were cut from 2 years down to 1 year. But, ultimately after many (fun) years, they were completely discontinued.

In my opinion, however, in clinical psychology training I think it’s essential to use simulated training before students work with actual patients. There are ways to reduce the cost of this training significantly, while keeping the core experience in tact. Unfortunately, we lost the opportunity to test that out.

Rest in Peace Clinical Skills I & II … those of us who were involved over the 6 years I was there really appreciated the chance to train in such a unique way.

Skip to toolbar
We use cookies to ensure that we give you the best experience on our website. If you continue to use this site we will assume that you are happy with it.Ok